Description:
Andolan Ek Violence Story - 2010 (Remake of  ) action movie directed by Veeru Dwait and produced by Mutyala Anjaneyulu. The film stars Vikramaditya, Srihari, Nisha Kothari, Sameeksha and Malavika. It's a remake of  Samrajyam Telgu Movies. It had an average run at the box office.


Super hit action movie Andolan Ek Violence Story (2010) (Telugu Hindi Dub) Synopsis-The story deals with the opinion differences between brothers. Both fight for authority and supremacy. Srihari and Suman play the roles of two brothers in disagreement. In their fury and aggression to win, both cause trouble and damage to each other. Their characters and personalities go through continuous changes in each step of their eventful lives.

The changes are brought about by their own experiences. Do they learn the lessons at the end are told in the enthralling, action-filled screenplay? Sentiment, romance and comedy find a place in the riveting theme. But above all, action finds a predominant role in the film. Malavika's role will have a special significance. 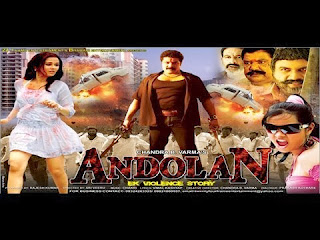